The Leaseweb Tech Summit 2015: “The more tech the better” 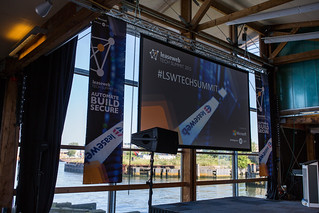 The second annual Leaseweb Tech Summit took place in Amsterdam on 4 June attracting over 200 participants. More than a dozen speakers from a wide range of international companies gave a series of presentations on the theme of “Automate. Build. Secure.´ Kicking off the day at The Undercurrent venue on the banks of the river IJ in Amsterdam, Netherlands, Leaseweb’s Innovation Director Laurens Rosenthal told the mainly developer and DevOps audience that the event was a chance to get under the hood of the internet and that “the more technical the presentations, the better”. He was right.

On the “Automation” theme, Marc van Eijk boldly stated that “Microsoft is cool again” going on to describe the benefits of Azure Resource Manager and his vision of how the hybrid cloud of the future will look. Job Snijders of NTT talked about his company’s use of SDN and some of the lessons learned from using automated control while Paul de Raaij explained how Coolblue develops its business critical software in-house using the principle of “continuous integration”.

The bulk of the presentations came under the “Build” umbrella. “Open source software makes the world better by sharing knowledge” proposed Sendgrid’s Robin Johnson before Julien Lemoine from Algolia went on to describe how his company created its super-fast search API using a highly distributed (and highly available) model. Leaseweb’s Stephen Hoogendijk recommended using Tutum for Docker orchestration suggesting that, while Docker is great in a development environment, it needs Tutum to perform optimally in an operational one.

Ryan Frantz of Etsy talked about internet tech from an enterprise perspective focusing on the importance of start-ups developing the right company culture from Day One. As Ryan puts it: “Docker is not keeping people around. Ruby on Rails is not. Culture is.” Cisco’s Bart Jan Menkveld went on to introduce the Group Based Policy Model for OpenStack that Cisco has open-sourced.

Peter van Dijk of PowerDNS and Diogo Monica from Docker took on the “Security” topic. Van Dijk addressed security aspects of DNS and DNSSEC while Monica reviewed key security issues all start-ups ignore at their peril – such as leaving your AWS login details in GitHub for anyone and everyone to see! Last but not least, Brad Lhotsky and Willem Gerber gave developer tricks of the trade in an entertaining presentation that included how to use ElasticSearch to dredge up hidden data buried deep in logs. 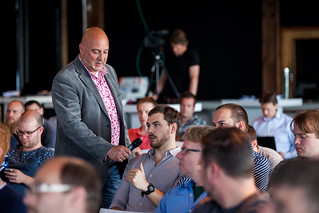 The annual forum for internet tech

Hosted by Trend watcher and Social Media Expert Richard Bordes, the event attracted internet professionals from far and wide. Each presentation ended with a Q&A and there was no shortage of questions from an enthusiastic audience. It was also a chance for people in the developer community to discuss the issues among themselves as well as to network with other like-minded specialists. Now in its second year, the Leaseweb Tech Summit is becoming a magnet for leading thinkers in internet technology and an important forum for high level ideas. And we couldn’t be more excited; plans are already underway for next year’s event which will no doubt be even bigger and better!

Find out more about the Leaseweb Tech Summit by following @LeasewebTech or going to techsummit.leaseweb.com. Alternatively subscribe to the Leaseweb YouTube channel where you’ll soon also be able to see this year’s presentations.